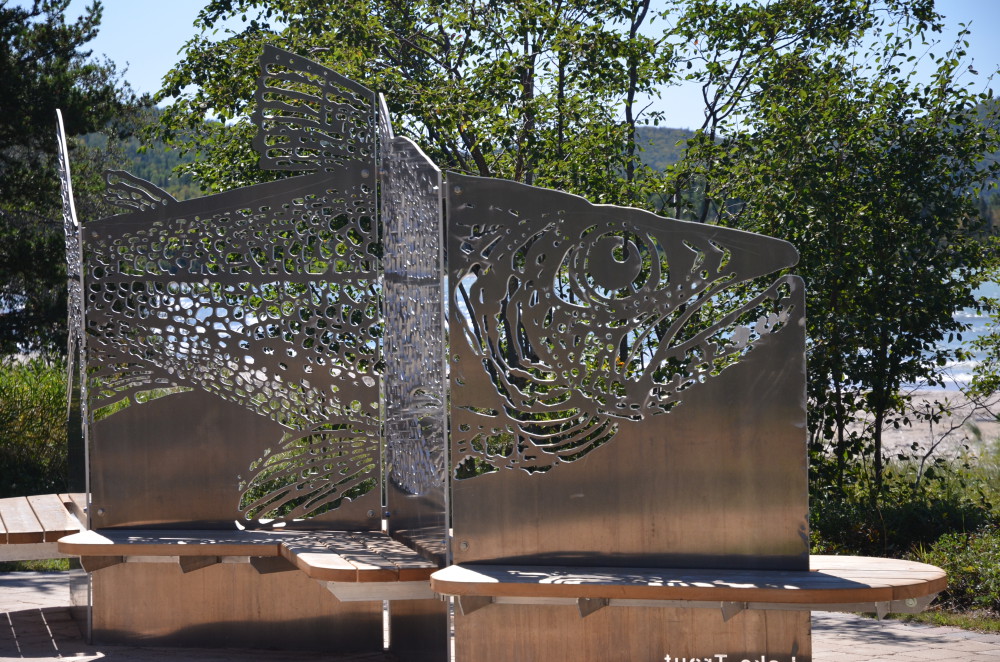 Up at 8, and straight to the laundry which is a ½ km walk away. It sure feels good to have fresh sheets on my bed. I had an awesome shower too, the best one so far because of the decent pressure. This park is large – it has 9409 hectares and its park lakes are on the headwaters of the Dog River which flows into Lake Superior. The park is used as a staging area for canoe trips down the Dog (University) River. The park landscape varies from flat sand plains to rugged bedrock hills.I crossed the road into the other side of the park where there’s a biking trail. I rode about 3km on it and for some reason, its isolation started to make me a bit anxious. I had this irritating thought that if something happened to my bike or me, no one would know where I was. Then I saw something in the distance that was large and dark brown, a log, a bear? It was enough to make my heart start pounding hard and I pulled an abrupt 360, luckily without falling off. I get annoyed when I manage to scare myself on a beautiful day, but there it is, for some reason things just didn’t feel good.

In the shower room that morning I had talked to a woman about driving east and mentioned that I was wondering about the best route to take. Her husband Peter walked to my site later in the afternoon and laid out a route for me to take all the way to the east coast. Fantastic! And then he helped me loosen my camera lens that had become fixed in place so that I can at least use it, not perfect but workable. Peter said he started his own company and works in fire suppression. He shared some trouble shooting stories about where he has worked, one of which took place on a gas rig built in Abbiddabi. He discovered that the system did not work because it had sand blown into it. A good hearted man, he was willing to take the time to come over and help me out.

When we started discussing campsites, he said the best one is right here, where we are at. So I stopped packing up and stayed another night. It was a lovely day and I realized that I was actually pretty tired – the constant care while driving and navigating, packing and unpacking every day – it all adds up. So, a whole day to relax! I got in some good hiking, and tired my legs out completely. I also did some clean up chores, and got in some reading too. What a pleasure. I made another delicious BCLT with beans for dinner, and sat with a nice fire again. Camping and relaxing at its best.