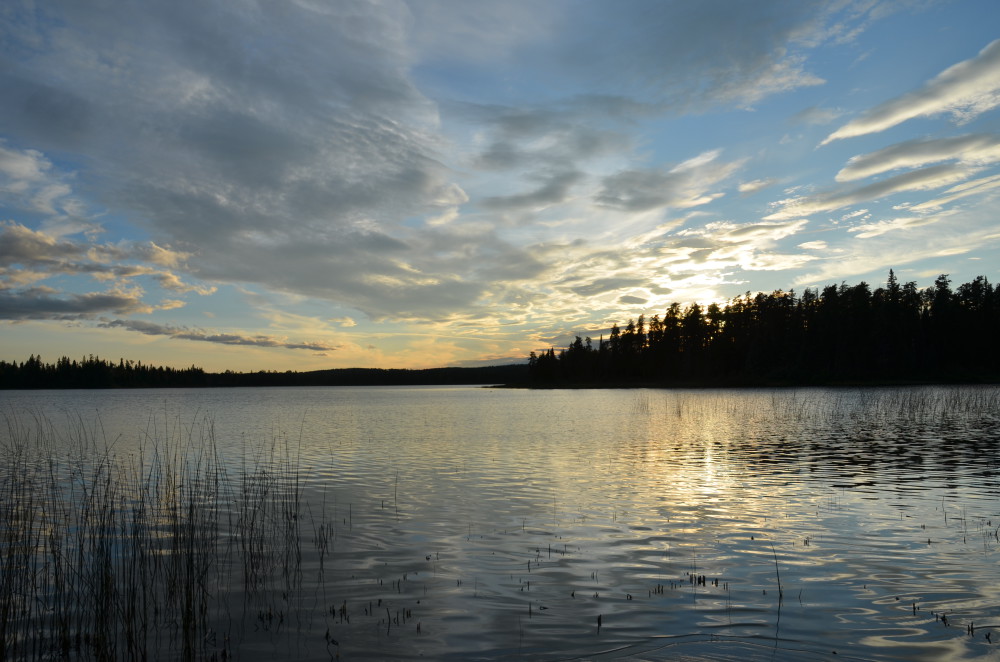 Another huge rainstorm last night with thunder and lightning. I started a conversation with a fellow from Oregon who said that he and his wife just spent six months working in Quebec. He said that the drive that I am on following the edge of Lake Superior is the prettiest part of the trip to Quebec. I am taking the initiative in starting conversations with strangers and I see that asking questions and not stopping at the start even if it’s a bit awkward sure helps keep things rolling.

So here I am camped on the Northern edge of Lake Superior, at the Rossport Camground, it’s quite a thrill for me to see it and be here. The water is clear and different shades of blue and the pebbles are pink on the beach. I had no conception of how big this lake really is, it looks like the ocean to me. A storm blew up so it is a bit windy and cool now but I have a good site near the beach with a path right down to it. I was lucky enough to get one of the best campsites on the lake, many of the inside sites seem crowded and exposed with no privacy.
I had a nice drive today; I stopped in at the tiny town of Nipigan for groceries and gas, and gained an impression that it had seen better days in the past. I am not sure if it was just where I happened to be standing but I saw several women with seen everything eyes, old bashed in pickups, and a huge business going in and out of the swinging doors of the beer store even though it was the middle of the day.

The young grocery guy told me that all the restaurants were very good in town. I walked into a Chinese restaurant and it took me a moment to adjust to the dim light, and I breathed in the musty smell of old furniture and paint, and then I could pick out faces of people sitting around the tv. They were staring at me with no hello, and no welcome. I have never done this before, but it was so embarrassing, I simply turned around and walked out, and drove away still hungry.

Tonight I looked at the map to see how far I have to go to the Atlantic, the distance is really quite daunting. I have travelled 3,201 km from Vancouver, BC, and to arrive in, say Nova Scotia, it will take me another 2,730 km. I checked in with myself and I feel good about continuing. Each morning when I start out, I feel excited and happy.