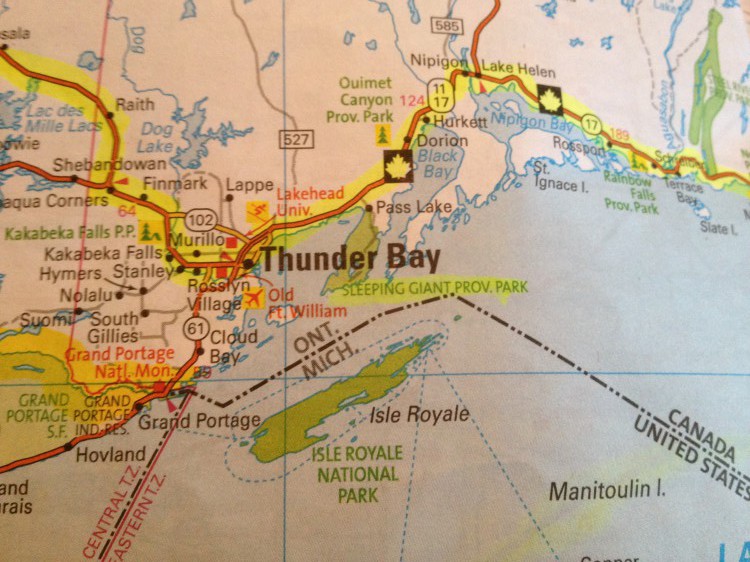 I found it quite a boring drive from Aaron Park to Thunder Bay, scrubby forest on both sides of the road and an unbelievable amount of big trucks and construction slowdowns and stops – it all made for a very long trip. I don’t think I could do this without audio books. I stopped for a walk around a lake at Upsala, the grass was all freshly mowed, but I didn’t see one single person there, no campers, and no employees. Inwood Park it was called.

Now I am camped at Sleeping Gian Prov. Park, it’s located on the Sibley Peninsula in NW Ontario, projecting into Lake Superior, and about 75km past Thunder Bay which I missed due to my turning left rather than right in the midst of the highway construction going on. Can you imagine, missing Thunder Bay completely? The gas stations in the vicinity are closed so there  might not be enough gas in my tank to make the next town, which is 120 km away – always a cheerful thought to have floating around in the back of one’s mind.

I put Baloo in the trailer while I went to register at the campground office. When I got back, he was trotting around the campsite with his tongue hanging out. My first thought was that someone had broken into my trailer, but when I checked the door, it was still locked. Then I looked at my main window, and the screen was pulled out. Baloo, my amazing gazelle of a dog, had leaped right through it.

This is a nice big park with over 100 km of trails and the best camp sites are on Marie Louise Lake. My site was in the bush area and there was no screen between me and the adjoining site, always a bit of concern in case they are partiers, but it turned out to be ok because the campers were a very tired father, Matt, and his daughter Cassie – they had been out hiking all day, and judging by their movements, there wasn’t going to be any late night partying in their site. When Matt heard what Baloo did to my window screen he told me that he had the exact tool that I needed to fix it. I was astonished, that of all the campers in this park, I was parked right next to someone who had just the right tool to push the screen back in to the rubber crevice around the window. In fact, I wasn’t even aware that there was such a tool, I thought you just got out your favourite dinner knife and went to it. Matt also offered me a bundle of firewood because he said they would be leaving early in the morning and did not need it.

I took the bundle quite happily and set about making a fire, but the wood was soaked and it was a real challenge – lots of smoke and no flames. Just when I seemed to have success, and my carefully constructed tipi was burning more than the paper, I think Matt ran out of patience because he suddenly popped over and said he would help me with the fire if I didn’t mind. As an ex-boy scout, he instructed me, the best way was to set two pieces on the sides, add the paper, and then cross the small stuff over the top. He did a fine demonstration although I think he singed his fingers a bit, while Cassie got in some good quality time with Baloo. I just stood around and took it easy – and kept quiet about being a former Guide and Wolf Cub Leader.

As I watched the flames burn down in my campfire, I thought of home, and my son’s exciting news that they are expecting a baby! I was so excited! From that warm happiness I moved on to thinking about the costs for this trip, I had not thought that dry camping in these parks would be so expensive.  I wondered if it was a good idea to keep driving east, or had I gone far enough? I thought of the “unknown” lying out in front of me, and compared it to what would happen if I turned around and headed home, which meant that I would have to dust off my resume and go job hunting. If successful, I would get to sit behind a desk staring at a computer screen all day and pack on responsibilities in layers until my day was jam packed with “must dos.” Blah! That vision made my decision quickly, I was going to keep heading east. Even if some days the driving did get a bit tedious in Ontario, every day, every night, was still an adventure – and I was having fun, in fact I was having the time of my life! If our purpose on this earth is to experience an inward journey, well then, I was also exploring an external journey that was equally compelling.