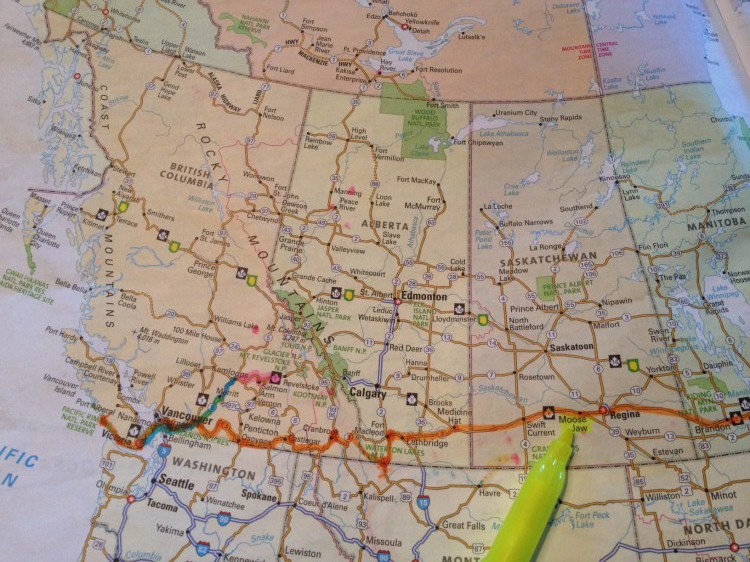 Where to today? I couldn’t wait to get out of the Swift Current campground, King of Grunge, and travelling anywhere else sounded good. I am now in Moose Jaw, camped at River Park Campground, a private campground – they only take cash, $32.00 thank you, and they seem settled and impervious to change. Perhaps they have been here for the last hundred years without bowing to technology. Moose Jaw, what a name for a town, I always wondered about that name when I saw it on the map of Canada. On the city’s webpage, it says this is one of the most common questions asked. They list three possible theories and the one I like best is that Moose Jaw is a short form of a First Nations word, ‘Moosoochapiskanissippi’, meaning “the river shaped like the jaw of a moose”, referring to the bend in the Moose Jaw River.

As soon as I had set up camp, I headed out to hike. There are some really nice walking trails in parks along the Moose Jaw River, with lots of picnic tables – all empty – a bygone era – and in case you forget your picnic, there’s a burger joint. I had some time to read a book – wow that was a treat – to read in the daytime, and then I washed the truck and trailer. I had bought a hand vacuum and tried it out on the dog hair and it works pretty good, so that should help with Baloo’s continual shedding of golden hair in my dark blue truck.

Later I talked with a couple from Montreal, they were on their way to Vancouver. I told them I was on my way to the east coast and they asked me if I really knew how much further that was – they said I had 3,000km to go, just to get to Montreal.  Yes, I can read a map, but Gulp…

It was hot and stuffy, and a huge thunder and lightning storm blew in tonight. Baloo didn’t like the booms which cracked right over our heads and so he barked up a storm. My pillow got wet because I had to keep the window cracked open for air  – and the rain blew in on waves. Oh man, sometimes camping in a wee little trailer with a big wet dog who protests against shocking loud noises can be a real ordeal. Too bad I don’t have a big old couch that he can hide behind. I might be hunkered down behind it too.