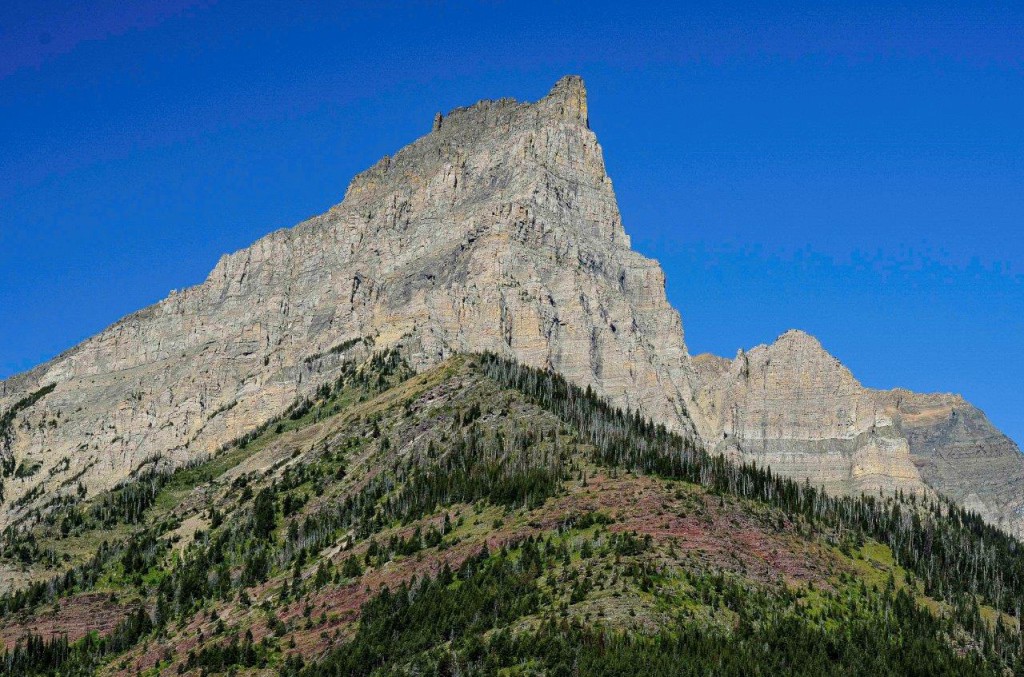 After the blissful start to a day of sunshine, coffee and breakfast the first thing on my agenda was to drive out to the Red Rock Parkway. It is fifteen miles through the Blakiston Valley, and follows an ancient bison trail. Along this route, there is a great view of Blakiston Mountain, the highest peak in the park at 2904 meters. It has highlights of red and green, and is quite stunning. Red Rock Canyon is definitely worth seeing, and there’s a nice trail around it. You can look down into the canyon as you climb to the higher end. A sign at the top end of the walk says that the canyon erodes at the thickness of one nickel each year. Next I hiked into the Blakiston Falls, it too is a nice easy trail, there is a viewing platform, and the falls are small but pretty. To let bears know that I was coming, I carried a stick and made as much noise as I could without feeling like an idiot. I met a woman coming along the trail with her husband and she was talking fast and gesticulating: They had seen a Mother Bear and her cub as they walked out on the trail. On my route that is to say. As I headed back, I whistled and banged my stick with great abandon, caring much less what others might think of me. I didn’t want to get in the way of a mother bear and her cub, no way no how.

Lunch happened in the middle of hundreds of tiny annoying black flies that kept wanting to land on me. I didn’t want to get to know them at all so my arms soon got tired from imitating windmills. It was definitely too hot to stay here at the campground, the hot sun was beaming down on the gravel and there was no breeze. Time to explore. I found it odd to find a town in the middle of a park, but there sits Waterton. I walked on the beach of Middle Waterton Lake and then Upper Waterton Lake. I started a four-kilometer hike in to the lower Bertha Falls. I noticed that there are ripe berries close to the trail and all of a sudden, I felt that there were bears all around me. I came across bear scat right in the trail, full of berries. It looked so fresh I thought it should be steaming. Two young fellows from Europe came up behind me and stood looking down at the scat. They said something about not having their overnight camping pass and headed back down the trail. I followed them, wishing I could be right on their heels, banging my stick and whistling.

Baloo cooling off – too chilly for me The Waterton Park Townsite is laid back and tiny, and there were many overheated tourists in it, all looking to buy cool souvenirs and t-shirts. I would have loved an ice cream but after seeing the length of the line in the hot sun, I left and drove the 15km up to Cameron Lake, on the Akamina Parkway. Up here is where the boundaries of BC, Alberta, and Montana all converge.

I hiked along the trail that runs by the side of the sub-alpine lake for a couple of kilometers. Warning signs said it was essential grizzly habitat and that they may be in the area so I found a solid stick and started banging it as I walked along. I was on high alert for the sight of grey or brown moving humps. I wanted to walk this trail but I was nervous too, grizzlies have their own agenda and if I was scared of black bears, I was terrified of the unpredictable nature of grizzlies. No one else seemed to be on this trail. I was taking photos of the beautiful glacier fed lake, and saw a few people out in hired red canoes that provided great contrast against the water. At one point, I was leaning out, looking through the camera and stepped right off the path into a hole, falling down off the path into some bush. Pretty stupid I said to myself, as I scrambled up as fast as I could, looking around to see if anyone was behind me on the trail. Luckily no one else was nearby, offering to help me up, often the most embarrassing part of a spill. My ankle was smarting and I gently tested its range of movement. I was far enough into woods at this point that if I had seriously sprained my ankle it would have been a long hike out. I brushed the twigs out of my hair, straightened my glasses, and dusted off my rear. Onwards. It was quite clear to me – either I took risks and saw all the beautiful parts of the land that I travelled on, or I could play it safe, and not see its beauty. I made the decision that for as much as possible, and given the odds that it was safer to hike than to drive a car, I kept hiking. Lucky for me, I didn’t read “The Bear’s Embrace” a truly heartbreaking memoir of Patricia Van Tighem’s life after being attacked by a mother grizzly bear while on an overnight camping trip in Waterton National Park. There had been a light snow fall overnight and Patricia and her husband Trevor had inadvertently walked close to a bear’s kill while hiking back on the Crypt Lake trail – a nine km trail that is accessed on the other side of Waterton Lake.

What was also clear to me was that the heat, the bugs, my dusty campsite, the fact that it was berry season and having no one to hike with all added up to my decision – it was time to leave.