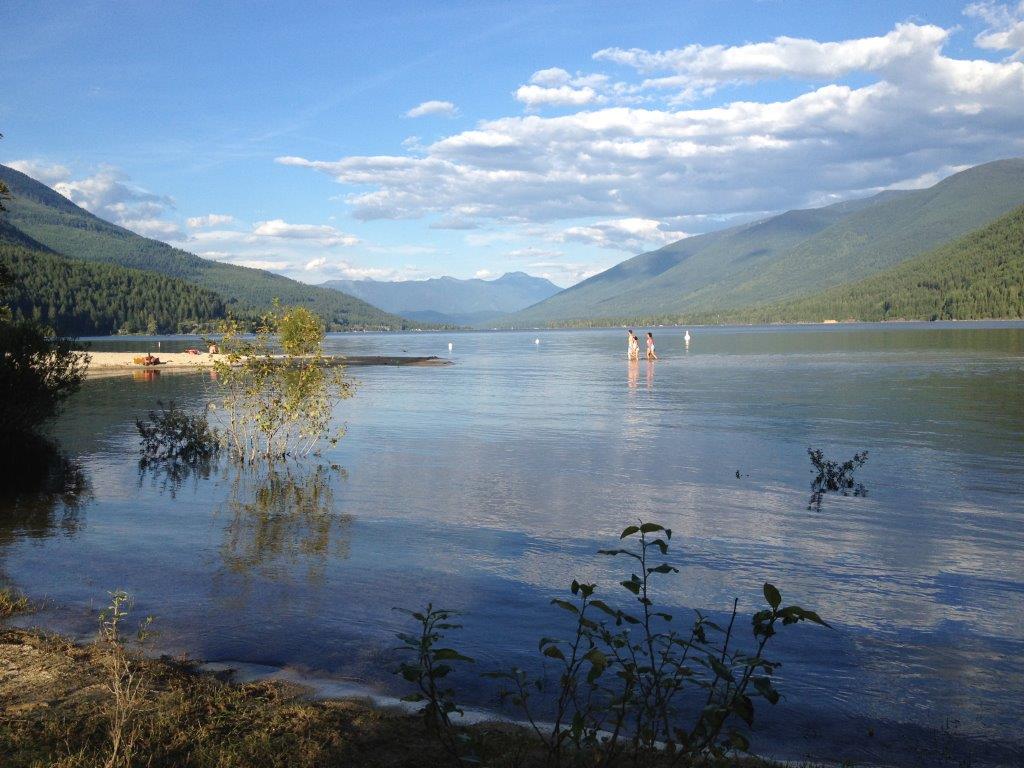 It was hard to leave Christina Lake because I had had so much fun there, but I needed to get my trailer fixed. With some persuasion I had arranged an appointment in Trail. My neighbour who looked like he was cruising 90 helped guide me out of the very tight campsite, and at the level entrance to the campground I pulled over and Jake appeared to help me attach the stabilizer bars. It feels so good when people offer a hand.

Once I was on the road, my reluctance about leaving  faded away on the corners and curiosity and excitement took its place. The road took me over another very high mountain pass. The Nancy Greene Summit is 1576 meters. When I arrived in Trail the heat from the pavement smacked me like a solid wall. The RV mechanic told me that it sometimes gets close to 50’C downtown.

The cure for the battery was relatively simple. The fuse had blown and melted into its holder. Hidden under the trailer hitch, I didn’t even know it was there. It was all fixed within 45 minutes. When I went to the desk to pay, the manager said to the mechanic – it took you about an hour and a half right? The mechanic said, nope, 45 minutes. I loved that moment of silence and exchange of looks.

On the road again, I drove through Rossland, home of my childhood hero, Nancy Greene, Olympic medal winner in downhill ski racing. Then through Montrose, Fruitvale, Salmo, Nelson and another 19km east to Kokanee Creek Provincial Park. It was not a moment too soon for us. Baloo was extremely patient but he got hot today because for much of the afternoon, the sun was shining in on him through the window. It had been a long day – packing up, connecting the trailer, the trailer repair, the distance we drove – over 220 km, and now it was set up time.

This park really surprised me because it was so big – it had one camping area in the trees and one huge open area in front of the lake, which dismayed me because it looked like a giant parking lot. Who knew that a camping spot could look like this, and that people would prefer it to camping in the trees. However, when I saw some kids and the number of mosquito bikes on their legs and arms, I thought maybe the sun baked parking lot camp side wasn’t so bad after all. I was lucky, they had one spot left. After me,  the clerk said, they would be turning people away. The lake was beautiful, dark and sparkling blue edged with a nice sandy beach, and surrounded by mountains all around. It gets dark here early because of them. The creek emptying into the lake was noisy and the water and twigs moving fast. Apparently, the lake is at its highest level in forty years. Some small trees were standing in the water. A lady sitting on a bench told me that some of the beach area has disappeared under water. Before I set up camp, I took Baloo for a dip, it was exhilarating cold, and I changed my mind about swimming far out into the lake. I drove to my campsite and there was a couple camped there, sitting back in lounge chairs, chatting and sipping wine, looking delightfully happy and relaxed. I stopped and told them politely that I had just been directed to this site by the office. The man jumped out of his chair and came towards my window. Baloo started barking six inches from my ear. Even with the prospect of me being the instigator for a possible hurried departure, the man introduced himself with a smile; he had dark curly hair, sun warmed skin, and dark brown eyes. He said, “I didn’t know we had to check in each day, I thought as long as we stayed, we were ok. We will try our best, but It will probably take us an hour at least to pack up.”

I didn’t want to make them move so I suggested he go to the office and explain the situation, and perhaps the staff could find me a different spot. I took Baloo for a walk, and when I got back, I was happy to see the couple relaxing in  lawn chairs with their tent still in place. Amit told me that there was another spot available for me just one row over. All to the good! After dinner, and the usual exploratory walk around the campground I got back to find two bundles of firewood sitting by my fire pit – a gift from Amit.

During my various stops along the route today, three people had complimented me on how nice my trailer and truck looked, and I smiled in remembrance. It is an awesome little package, a long way from the rusted out trailers and camper vans that I had looked at in the beginning of my search. This unit was something that I had never anticipated buying when I first planned my trip.

As I sat by the fire that evening, I looked at the map, to see where I was going next. I looked at the distance that I had travelled; it seemed like a long way from home and all the people that I knew. I had left so much behind. But there was so much in front o of me too. Adventure, the unknown. Travelling the route I took today had allowed me to miss the Kootenay Pass Summit at 1774 meters. The only reason I knew to do that was because I had talked with a fellow traveller at Christina Lake.

I realized that although I had only been  a few days on the road, how much more ready I was to smile at strangers, to engage other campers in conversation. It was easy – t standard opening – “how are you?” we asked, “where are you from?” And it expanded from there. No matter our occupation, age, or experience on the road, there was always lots to talk about.

The stars were out and I looked up from the crackling fire. At times during my trip, I have almost felt overwhelmed with this province, with its sheer vastness, the ocean and lakes, the countless number of trees, hills, valleys, and the colours and richness and connectedness, the perfection of it all. I was so lucky at how the path in my life had changed, giving me the opportunity to be here. I breathed a silent thank you to the dark night sky, to its rich and enchanting, silent,  mystique.

After an early walk the next morning, I unhooked the trailer and drove into Nelson for gas and a look around. There are lots of nice stores on Baker Street, a definite attraction for tourists. I had lunch at a bakery and enjoyed checking out the people and the buildings. I didn’t buy anything because there is no room in my truck or trailer for anything but essentials. Part of my belongings, my “essentials” includes five totes boxes of books. Books which I consider much more important than tools, spare tires, and extra clothes.

I headed out of town soon because I wanted to hike in Kokanee Glacier Park, but was sorely disappointed when I arrived at the entrance and it said no dogs allowed. I wasn’t about to go hiking alone in bear country without Baloo so I headed back to the campground and hiked along the park trails. I enjoyed the hike to Canyon View, it follows the creek all the way to head of a small canyon and it’s quite beautiful, there was an amazing amount of water travelling in the creek.

On  a later hike, a big black dog came running at us down the path and started barking and growling, and looking like it was going to leap on us both and tear our throats out. It was unnerving to say the least. The owner appeared after a few minutes and told me that it was all my fault because I had my dog on  a leash. All the adrenaline and then that blaming comment, instead of an apology, combined to rile me up. I told him that in the park, dogs were supposed to be on a leash, and that it was him, that was the problem, not my dog being on a leash.

Well, with people like that, you can guess how the conversation continued. He went on to tell me that I shouldn’t carry a stick, that it made me look aggressive and that also upsets his dog. I said well, I can’t  help that, I carry the stick because there are bears around here. He burst out into a nasty sort of laugh and told me in the most condescending way possible that my little stick wasn’t going to protect me from any bears, and how stupid could I get. I couldn’t leave it at that, I told him that it was to make noise, not to fight off bears. And then I marched off. Some people, I almost thought I would rather have met a bear than him, but not quite.

After that it was time for a cool down dip in the lake and then I packed up to connect the trailer, always a challenge when doing it alone, to exactly meet the tow ball with the trailer hitch. I was leaving early the next morning and I didn’t think my fellow campers would appreciate my various bangs and clangs. A fellow called Wayne came over and guided me smoothly back to the hitch, and we had a nice chat. It is so nice when someone pops over and helps out. Later I biked around the park and fit in a short nap – ah holidays! Baloo seems to want to sit in the truck so I let him be there. I think it allows him to relax in new places and not always be on guard.