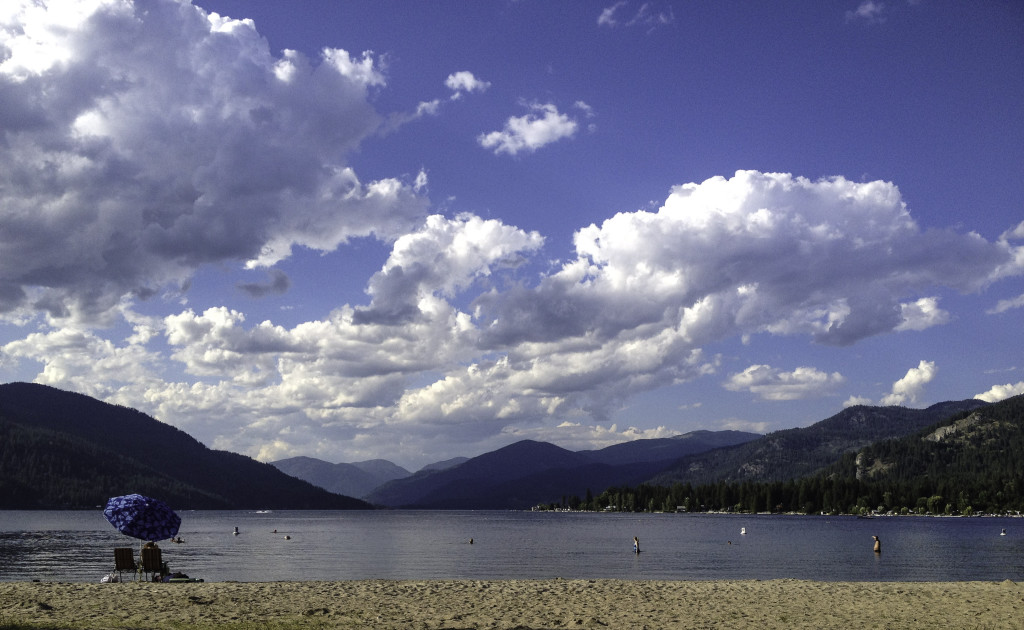 I stayed in the slow lane on the big climb out of Osoyoos this morning to conserve gas except when I had to pull around a semi-trailer, some of whom who were going so slow that they looked like they were going to barely make it to the top. The initial sadness over leaving had soon left me and now I felt my nerves tingling, I was excited to be on the road again. The sun reflected off my gleaming new truck and I felt unbridled delight in this safe and deluxe new chariot.

There was no need for music to divert my thoughts; there was a new and interesting view around every bend of the Crowsnest Highway. I admired the ranches spread out over the rolling hills and I wondered what it would be like to be so self-sufficient, to be master of all the land around you. The winters would be long and cold up here, and I wondered what couples would do to keep from boring each other with the same conversation each day.

Rock Creek – don’t all creeks have rocks? Midway, originally known as Boundary City, Greenwood, site of a Japanese Canadian internment camp during the Second World War, Grand Forks, an early 1900s settlement for Doukhobors, a pacifist sect that sought to escape persecution in Russia, and finally twenty minutes later, Christina Lake. Legend has it that the lake was named after a half-Salish child who saved the dispatch satchel that held the mail and postal records when her father’s canoe capsized in the lake.
(http://www.crowsnest-highway.ca/cgi-bin/citypage.pl?city=christina_lake) According to the helpful woman at the nearby information center in town, my best bet for reasonably priced accommodation is to stay at Christina Pines Campground. The tourist season is short but busy here. There are lovely sweet smelling pine trees all around the campsite and right beside it is a fenced schoolyard that works out perfectly for dog walks. For people who don’t like to swim in the lake, there’s also a small heated swimming pool.

Christina Lake is located halfway across the southern edge of BC, just north of the Washington border, and is advertised as the “warmest tree-lined lake in Canada.” It is eighteen km long and almost two km wide. My campground is approximately four blocks from the provincial park beach and at the entrance, there is a sign saying no pets allowed, not anywhere. It was hot, over 30◦C, and I had to find somewhere for Baloo to cool down so I went exploring and just past the main street bridge, found a walking path that wandered in from the lake alongside Christina Creek. Two dogs were already in the creek and there was quite a current – they looked like they were on a treadmill with the water flowing past them. Baloo waded in and I felt better in the shade of the surrounding forest.

After that, it was my turn. I parked a wet Baloo in the shade, and walked to the park beach. For a moment, I sat and admired the lovely sand, the sparkling blue water, and the surrounding tree covered hillsides. There were a few people sitting at picnic tables and benches, and some families lay on beach towels spread out on the sand, but for this time of year, I was surprised it wasn’t more crowded. The sun quickly became unbearably hot on my west coast skin and I splashed in fast, expecting the water to be bathtub warm. It wasn’t, it shocked me with its chill and I suddenly doubted the truth of the sign that I had seen earlier – “warmest tree-lined lake,” maybe that was a special category.

To keep warm I swam along the top layer and when I looked down, I saw thin green fronds of milfoil weed rippling in the current as if trying to snare me – the high ones brushed against my arms and legs – and the water became dark and murky as I swam deeper. Only one other person with a white bathing cap was swimming out along the buoy markers, everyone else was just wading or playing in the water. Perhaps beach visitors just don’t like to swim anymore.

Next on my agenda was a drive to see a trestle bridge and then up the road past it to see where it went. The road sign said Santa Rosa. It was a gravel road that climbed steadily and around each curve I expected to reach the top, but it just kept going up. There was no shoulder protection to stop one from going straight off the cliff side. My hands clenched the wheel and I imagined someone coming wide around the next corner, hitting the brakes, and skidding on the gravel when he saw me. It would be a terrible collision because I wasn’t going to move further over to the cliff side, no way.

I felt sick looking down; it was like being in an airplane. There were no turnarounds and so I kept climbing higher. Finally, I found a slightly wider spot in the road that was far enough away from a corner so there would be time for an oncoming vehicle to slow down while I was sideways to the road. It chilled me to back up, because the bed of the pickup looked like it was hanging over the edge, but soon enough I made it around and was heading back downhill, watching for oncoming traffic, but now I had the inside track.

I later found out that this road is the Cascade Highway. Completed in 1926, it was driveable by “Tin Lizzy”(nickname for the Ford Model T automobile), in 1924. It follows Dewdney’s lead up through the 5400 foot heights of the Santa Rosa Pass to Rossland and Trail. The Dewdney Trail is a 720 km (450 mi) trail that served as a major thoroughfare in mid-19th century, tying together mining camps and small towns that were springing up to service the gold rush travelers. (Wikipedia)

Monday, July 30th 32◦C
I am out of my depth here in so many ways that it seemed perfectly natural and not all that scary to wander over and talk to my new site neighbors Gord and Jean. They are pros at setting up camp; they even have an outdoor oven for smoking meat. They were super friendly and Jean and I ended up going for an eighteen km bike ride together on the Cranbrook Trestle Path. Gord said he would listen for Baloo. It was a nice ride, and easy because as an old railroad track, it has a maximum grade increase of two percent. The view down to Christina Lake and the meandering river, which looked a deep blue-green, was stunning. And we got to ride on a trestle bridge over the river. Next we biked into to look at Cascade Falls, where three people had died on the weekend when they went over the falls in tire tubes. It was eerie standing there listening to the rushing water of the falls and thinking about how it happened. A family outing – having fun floating on tire tubes, and then the sudden shock of getting too close to the falls and being swept along in the powerful current, unable to get to shore. I thought of their fear, and bowed my head. When we left the bush around the falls, we got lost. We thought we were heading back to the campsite, but in front of us loomed a long and steep hill that neither of us could remember. The heat coming up from the pavement was brutally hot. I had run out of my water an hour ago and my lips and throat were dry and burning. Then a handsome young guy in flaming orange biking gear stopped beside us on the hill to ask us if we were ok. He laughed when we told him where we wanted to go and said lucky you, you don’t have to climb this hill. Pull a U-turn and you can almost coast right back to town. What great timing that we met him so near to the bottom of the hill. And what a nice guy to stop and help us when he was facing such a steep grade in front of him.