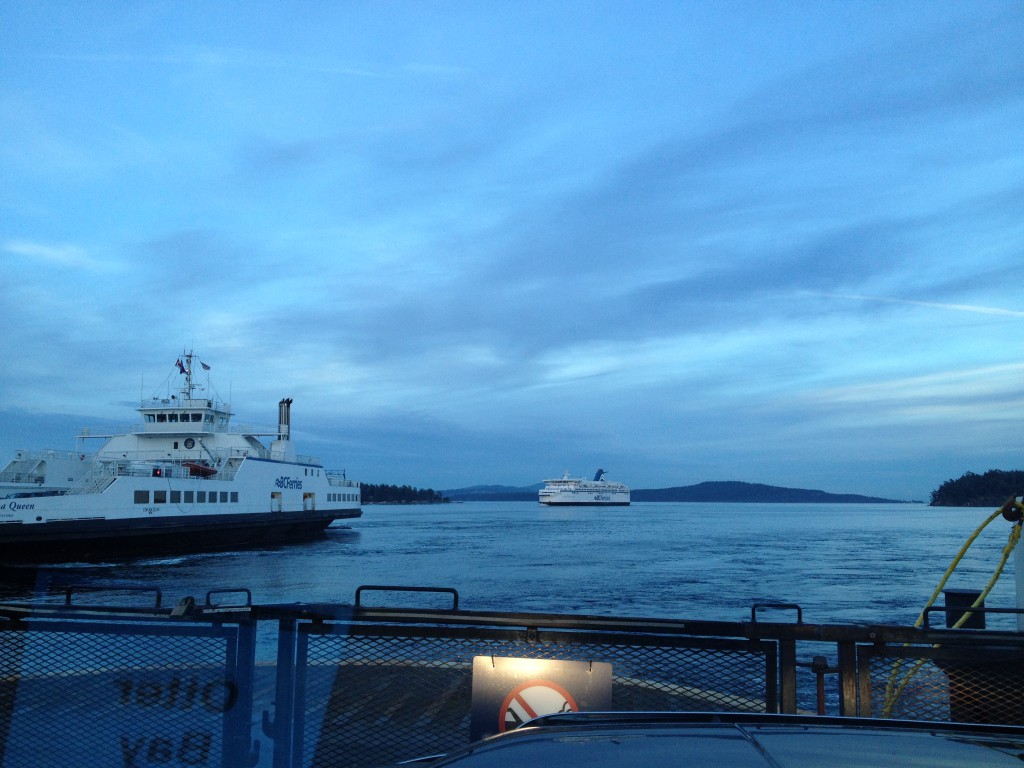 My journey east has begun!
I carefully hooked up my trailer at Oceanside RV Park and after a walk to the beach, headed out early to my hometown of Sidney to pick up a coffee before catching the ferry. I was also returning a cooking grate to the hardware store and hoping that I wouldn’t see the same young fellow who carried it out to my truck the day before because he dropped it on the way, right on his big toe. I was thinking he wouldn’t be too happy to see it coming back. I parked on a side street, my first parallel parking, and it went fine because there were no other vehicles on the road – dead easy, but I felt like it was a victory.

Always a walk before hitting the road… As I drove to the ferry terminal, I could feel my stomach churning – getting on the ferry without crashing into anything, and the thought of driving in Surrey with my trailer were combining to turn me into a giant stress ball. At the toll booth, they measured the truck and trailer and said I was 37 feet long, that worked out to $150.00 one way for the ferry fare – wow, expensive!

I summoned up courage from who knows where and drove onto the ferry like I knew I was doing, but I didn’t, I felt like I was 100 feet wide and that the lanes were way too narrow, but the crew helped to line me up. The ferry’s horn blasted, and then we were on our way. I went up top to the outside deck and watched as Vancouver Island faded in the distance. I wondered when I would see it again, and who I would be when I came back.

For the rest of the hour and 40 minute trip I stayed down on the car deck with Baloo and looked at the road map of Surrey, the city where I was going to stay overnight to visit family before I took off. My plan was to stay at a trailer park, but I hadn’t been there before. The sight of all the highways gave me a headache, and my stomach was one tight drum of unease.

Then the phone rang, startling me. It was my tenant, who was staying in my house while I was gone. He said in his lovely British accent that he was phoning to say goodbye, but also to tell me that there had been a terrible accident on the Pat Bay highway that they had passed last night while driving home to Sidney from Victoria. The vehicle was a “caravan”, like mine, crashed and tipped over on its side. He said he wasn’t sure if he should tell me about it or not. I thanked him, and said goodbye, and sat there dazed.

My worst fear was missing a “slow down” sign and going into a curve on the road too fast, and then the trailer would swing wide and pull me over, and then the truck would roll over, and fall down the hillside or the really stiff cliff, depending on the day. I sat there feeling faint, and then I stopped and pulled myself together. I put my hand on my stomach and took some deep breaths. I reminded myself that I was getting better every day – hooking and unhooking the trailer, that I was more used to my width on the road, and that I had driven on the ferry with no problem – each step, an accomplishment to be celebrated.

One thing about nerves – I didn’t feel like any breakfast, perhaps this would be the most successful diet ever. Last night though I had really tucked in, eating tasty barbecued ribs with corn on the cob at a café. It was Friday night, and I felt funny being alone, and sad too, as other people sat laughing and chatting at the other table, but I realized that it was just something else to get used to when you travel alone. And if the server feels like talking, well then, it’s a grand opportunity to meet someone new.