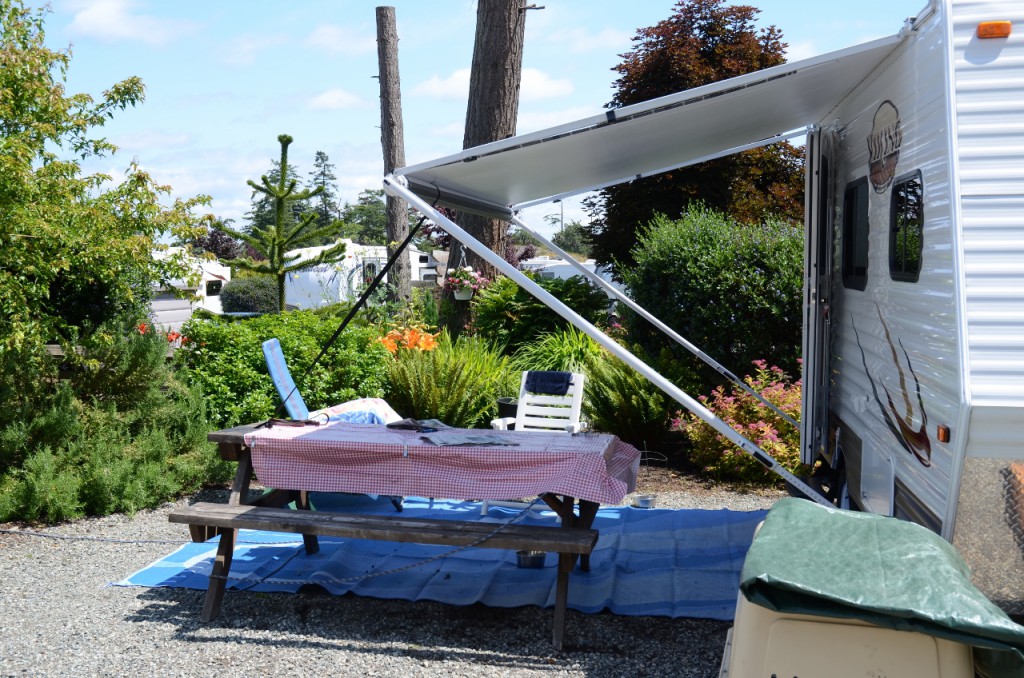 I did it. I packed up all my goodies, stowed everything away, followed my step by step “Pack up the trailer” instructions that I had written out, took several deep breaths, and then started driving around the campground, and practiced backing up the trailer. Having never done this before I realized right away that it’s a lot tougher than it looks. And I was not very successful – bordering on the hopeless. After 45 minutes or so, my neck was getting sore so I decided that was enough for now and I left Fairy Lake. Next stop – China Beach. China Beach – awesome is the only word I have for it! Because I had been so nervous getting ready I hadn’t eaten any breakfast, and it was way past lunch by the time I reached Sooke which was actually only 70 km from Port Renfrew, albeit on a very twisty, curving road, I was really starving. At that point I found out what was to be a perennial problem, there are very few spaces to park a truck and trailer along any main drags where the food stores and restaurants are located, and going down side roads sometimes results in places where you can’t turn around.

I finally found a parking area that was unfortunately quite steeply sloped down towards the waterfront, but it looked large enough to turn around in. I drove in, and started to turn, but came up too close to a parked car. I tried to back up, but the only way of clearing the car and the one behind me was to point further downhill. When I was facing downhill it was a real challenge to back up without big lurches because the truck and trailer started to coast down as I moved my foot off the brake to the gas. I got more and more twisted, and after 1/2 an hour I put my forehead down on the steering wheel and cried. Of course I felt much better after that and with new resolve I backed and turned, and backed and turned, until I finally made it out and parked along the side of the road.

I could feel my legs trembling as I walked back to the main street and knew that I needed fuel fast. I couldn’t find anything particularly healthy, and I had the dog with me so I decided on some take out samosas. They were nuked by the clerk, tasted like wet under-cooked dough, and hit my stomach like two rubber gum boots. I made the firm intention to have good snacks available while driving.

After that I drove for about an hour until I reached Oceanside RV Park on the Saanich Peninsula; it’s located about 15 minutes from downtown Victoria and the same amount of time from the Swartz Bay Ferry Terminal. I paid, found my spot, and then proceeded to make a fool of myself as I tried to back into my spot but couldn’t. I had to back up at an angle, and the trailer kept jack knifing. When it didn’t jack knife, it went too wide, it just wouldn’t fit in the space. I knew people were watching, my big old diesel pickup made enough noise to guarantee that, and I also knew that I couldn’t make it in without someone guiding me. A man suddenly appeared in front of me and began waving his arms. Baloo began barking in my right ear. The man waved, I went forwards, cranked, backwards, cranked, followed the wildly gesticulating arms, in and out we went, and all the while, bark, bark, bark…

How could backing up a frigging little trailer be so difficult? No matter which way the man waved at me, the trailer wouldn’t respond in the right way. Another man came out, and he stood right beside my window even with Baloo carrying on, and showed me which way to turn the wheel, never mind the back of the trailer. Voila! Five minutes later I was parked. Then the fellow stayed to help me set up, and proceeded to tell me everything there is to know about trailer set up, and I mean everything. I don’t believe he missed a single step.

I nodded, and smiled, and thought about how tired I was, and that I might fall asleep standing up. My guide was really enthused, and he cranked up my stabilizers so high I would have rolled right out of bed if I had left them that way. I waved thankfully as he left and watched him go into his trailer, and then waited just a few more minutes until it got a bit darker and then I pulled out my carpenter’s level and rolled down the stabilizers – they’re the supports that stop your trailer from rocking and shaking as you move around inside, and also help to level the floor when parking on uneven ground. Fancy rigs have a button – push it – and the stabilizers go up and down all by themselves.

Finally it was bedtime, but it was pretty noisy with lots of coming and going, it being Friday night and all, so I wasn’t really sleeping. Then at midnight, Baloo started barking hysterically. His bed was in the truck cab because he didn’t like being in the trailer, and that was ok because it left a lot more room for me. Besides, I was mad at him. When I had taken him for his last walk for the night, I had directed him to walk in front of me – after all his job was to protect me right? But he wouldn’t, and so I pulled him to the front, and then he scooted in behind me and I ended up falling backwards over the top of him, landing flat on my back, with my head smacking down last. He turned to look at me with his tongue hanging out above my face to see what the heck I was up to, or rather, in this case, down to, and it took all of my control not to reach up and smack him on the nose.

But now I had this quandary, I had my flashlight and all my trailer lights on, but I couldn’t see anything through the windows, and what or who, was out there that would make him bark? I had to stop him, or someone would call the police I was sure. I opened the door, and shone my light around, but there was no way that I was going to step out into the darkness. Eventually Baloo stopped barking, thank goodness , and I retreated back into my trailer, locked the door, and checked it twice more. As I lay down again, I realized that I couldn’t leave him out in the truck anymore, that we would just have to share the “master bedroom.”