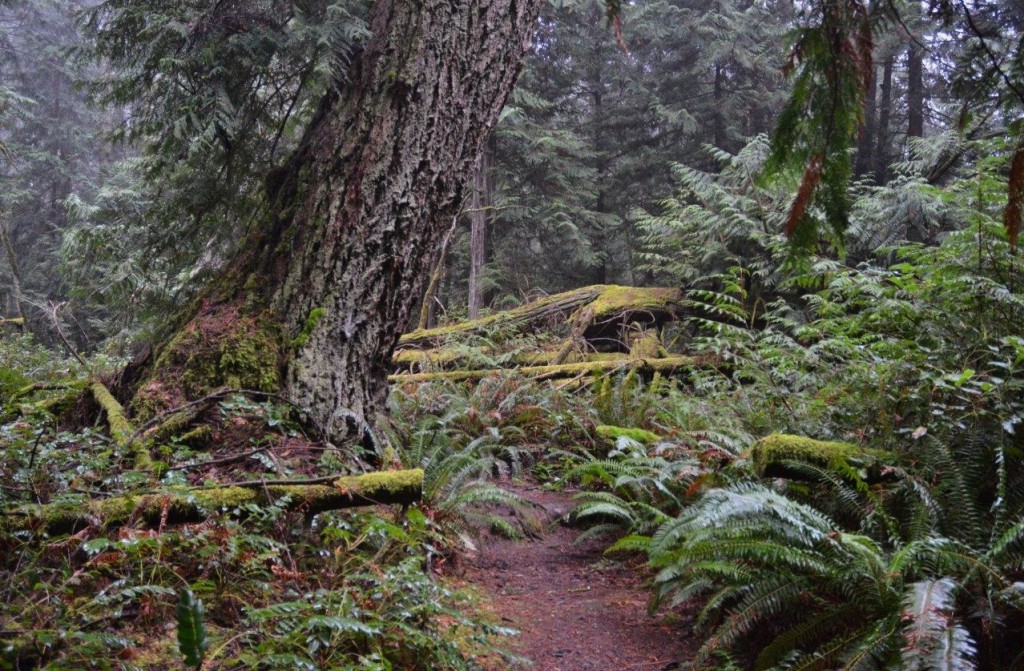 Yesterday, the morning light came late because a grey blanket of fog lay settled between the trees. I thought that it would be the perfect gloomy and intriguing day to explore the Cedar Tree Park Reserve. After finding the trail head off North Road, I parked and then Baloo and I followed the path into the park.

There were huge old trees, layers of moss-covered decaying logs underneath, and I felt a deep silence as we left the road behind. Silent giants living in a world apart came reverently to mind as the path took us deeper into the woods, and I craned my neck to look up at the massive ridged trunks, to where the top branches disappeared in the fog.

After a couple of hours I suddenly realized I was chilled to the bone, and my fingers felt like they were freezing from hanging onto the metal legs of my camera tripod. As I looked for the way out, the oft heard words “lost again” started floating around in my brain.

Here’s a shot of Baloo that I couldn’t resist taking as he waited patiently for me to make up my mind – left fork, or right? And what’s that big arrow scraped in the dirt pointing at? There were no signs, just trails, and two or three forks, each one requiring a decision, until eventually I came to a road. Luckily, for me, there was a man walking towards me but he did have a loud barking dog. We stopped to chat, and I heard that the dog had recently lost her long-time canine buddy, and she now barked at other dogs and strangers, a behaviour that was new and challenging.

Baloo seemed to know she needed calming and just sat down and looked away while she barked. On the other hand, perhaps he was just tired from our long walk.

The kind stranger told me the right roads to take back to my truck, and it felt good to be heading towards home. At the same time I also knew that it feels good to be lost, even in a small, temporal way.

Erika Harris agrees: “It is good to feel lost… because it proves you have a navigational sense of where “Home” is. You know that a place that feels like being found exists. And maybe your current location isn’t that place, but, Hallelujah, that unsettled, uneasy feeling of lost-ness just brought you closer to it.”