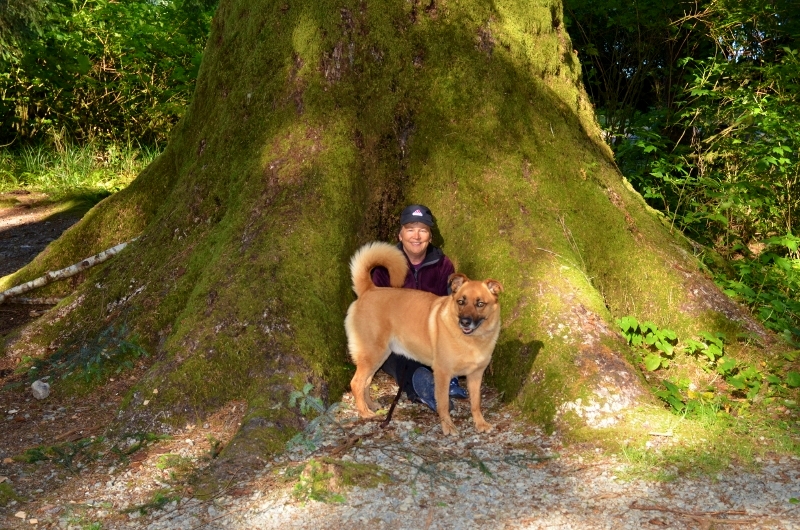 July 7, 2012
It’s late on Saturday afternoon, and I decided it was time to go out exploring. First, I drove to Lizard Lake campground and found out that what used to be a Texas Mickey challenge for young Port Renfrew teenagers is now a well-marked trail all around the lake. We set off into the woods, and because the camp ranger had told me that there were lots of bears around, I picked up a sturdy stick and started whistling and making stick noises on trees as Baloo and I followed the path. I didn’t want to stumble on any sleeping bears or cubs out for a ramble.

There were huge old stumps and lots of new trees growing out of them. I could see a long ways into the woods because the trees were so tall the canopy of leaves and branches cut out most of the light. It was beautiful, and the silence was so deep that I almost felt it. I wondered if in all the years of this silent presence, was it welcoming, or just disinterested in flecks of energy like me?

As I went deeper into the forest, thoughts swirled, and I felt concern, what if I tripped and sprained my ankle? What if a bear attacked me? No one knew where I was, not one single soul in the world. How long would it take them to find the remains? I chased these thoughts away with irritation, how could I be thinking like this? I wanted to feel peaceful and at ease in this beautiful land of huge spruces. When I reached the road, I felt a rewarding feeling of bravery wash over me, I was safe, and it felt good to have been on this adventure. “Onward” I said to Baloo and headed the truck further east.

I decided to try another road that headed to the San Juan River campsite. Immediately we hit gravel and potholes. There was a warning sign about the road no longer being serviced and that it shouldn’t be driven on with rented vehicles or those with low carriages. Did that apply to me? It was dusty, and I wondered what would happen if I had a flat tire, or a broken something or other underneath the truck? I kept driving. I knew that if I was going to have fun on this trip and discover beautiful places I would have to stop being a little chickenshit.I went over a couple of small wooden bridges with the railing no higher than a foot or so. You could hit them and drive right over them and fall into the river down below… It’s all my responsibility I thought, and it occurred to me that sometimes in my life I had done a pretty good job of avoiding responsibility. When young, you can sometimes find solace by running to your tall strong parents and hoping they will solve your problems. But around 12 years old, rebellion sets in and the last thing you want to do is ask them for help. After all, they don’t know anything anyway! Finally, there was the husband – the man who steps in and fixes electrical thingees, lifts heavy objects, takes care of dastardly plumbing issues, goes out in the cold to chop firewood, and gets up and checks things that go creak in the night. Well now, I didn’t have one of those handy guys, it was just me and Baloo. And I don’t think he can change a tire, but heck, I’ve got BCAA!

I kept driving down this gravel road that went to who knows where and as I drove I felt the clarity and excitement in knowing that every road I chose was my decision, and I had to live with the consequences. If a tire blew, if the engine simply stopped running, if I got lost, if I ran into the “bad guys” I had to start believing in myself – that I would somehow find my way.